Dear TPAAF Board of Directors, Officers, and Members of TPAA

On January 20, 2010, TPAA represented and exhibited the compassion of Thais in the United States, through its TPAAF Disaster Fund, by donating $10,000.00 in efforts to help aid the Haiti earthquake victims. A check was written to the Greater Washington HAITI Relief Committee. Dr. Saleewun presented this check to Mr. Donald Manzullo, U.S. Representative of Illinois’s 16th District and Co-Chair of Friends of Thailand Caucus. Those present to witness this event included the Minister and Deputy Chief of Mission, the Royal Thai Embassy, and Mr. Sek Wannamethee. Before leaving this event, a New Year’s gift from TPAA was presented to Mr. Manzullo by Mr. Sek Wannamethee.

A letter from the Co-Chairmen of the Friends of Thailand Caucus was also sent to his fellow U.S. Congressmen to encourage them to join the Caucus. So far, nineteen (19) congressmen have signed up to be members. The Friends of Thailand Caucus was initiated and formed by the Royal Thai Embassy and a few US Congressmen. It was founded on September 24, 2009. The Caucus was formed to help establish a stronger relationship between the United States of America and Thailand. 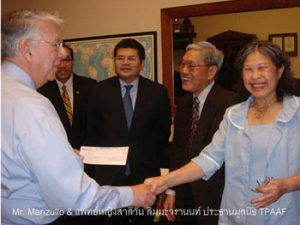 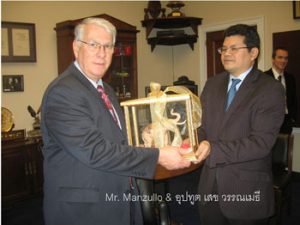