Happy New Year to everyone.

I am very excited for the role of 2011 TPAAF President and have many ideas and events planned for this coming year. While we realize that the current US economic situation will make it a challenging year for the Foundation and some of our donors, it is the goal of this administration to put forth our best efforts to continue to fulfill the Foundation goals. This includes promoting the advancement of medical and scientific knowledge throughout the world; fostering the advancement of health care delivery and education in Thailand (which includes the medical mission); providing scholarships, grants, and financial aid programs to assist individuals in completing their healthcare education and training in Thailand or the United States; and most importantly, assisting TPAA members to fulfill their philanthropic goals.

The following fund raising events are planned for this year:

The following activity to promote the involvement of our younger generation physicians is also planned for this year:

– May 30, 2011 Memorial Weekend – The Next Generation Seminar to be held in Chicago

The following meetings are scheduled for Foundation Board of Directors:

– First meeting in Cha-am during the annual TPAA convention (February 12, 2011)

– Second meeting aboard the Princess Cruise to Alaska in June

– Third meeting to be scheduled if necessary.

Additionally, we are also preliminarily planning for a Medical Mission to Egypt in the fall. I will also be updating you periodically as new Foundation events arise.

On behalf of TPAAF, we would like to wish you a very prosperous and healthy 2011.

The TPAA Foundation has been very busy these past several months since our last communication in January 2011. In March 2011, we started the Japan Earthquake and Tsunami Relief Fund, and through your humanity and generosity, we were able to raise a sizable amount of money, which we donated to the Japanese Consul in Chicago in early May 2011. 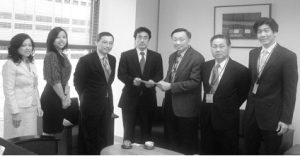 In April 2011, we created the Thailand Flood Relief Fund and Nakorn Srithamaraj Hospital Flood Relief Fund, and again through your passion and generosity, we have raised close to thirty thousand U.S. dollars to date. We plan to donate ten thousand dollars directly to the Nakorn Srithamaraj Hospital and will donate the rest of the money to Thai Red Cross. These contributions will be made next month to the Thai Consul in Chicago.

Then in June 2011, a fundraising cruise to Alaska will be held to benefit the TPAA annual medical mission in Thailand and the TPAAF Education Trust Fund. The cruise is set to leave on June 25, 2011, and will return on July 5, 2011.

On July 31, 2011, TPAAF will host a golf outing to raise additional money for the annual TPAA Thailand medical mission. Of note, this event is cosponsored by the Thai Golf Club of Chicago as part of its annual Dr. Sam’s memorial Cup (Dr. Samroeng Sukakit) tournament.

Lastly, in early October 2011, our Next Generation physicians will be hosting their second annual educational seminar. This CME event will be sponsored by the TPAA Foundation and by the TPAA Midwest Chapter. Details of this event will be available during the next few months. We would like to invite all of our TPAA members to participate.

Have a wonderful summer.

Holiday greetings to all TPAA members and families,

As 2011 draws to a close, I would like to take this opportunity on behalf of the TPAA Foundation and myself to wish you happy holidays and a new year filled with good health, happiness and prosperity.

The Foundation had a very busy year and we are thankful for all the support from our members, families and friends. We fulfilled many humanitarian causes with very generous donations in support of Thailand and other countries during their time of need. I am proud to highlight the many accomplishments that the TPAA Foundation 2011 has achieved.

These highly successful events and activities would not have been possible without the professionalism, hard work and sacrifice of the 2011 officers, committee chairpersons and committee members, and I would like to take this opportunity to thank all of them for making the 2011 foundation function both efficiently and effectively to serve the TPAA members.